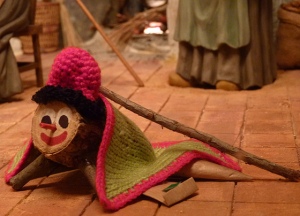 Cute, right? Wrong, this is about to get super creepy! In a traditional Catalan Christmas there is no Santa Claus, but don’t pity Catalan children for they have tió de nadal! (*Remember, this is Catalan, not Spanish and the accent is on the “o”, not on the “i” which would mean “uncle” in Spanish). Linguistics aside, “tió de nadal” translated literally means “log of Christmas”.

This little log might look festive and cheerful, but he has more coming to him than wearing a red barretina and a smile. On Christmas morning the children will gather around him, and sing a song while hitting him with a stick until he poops out presents for them! Don’t believe me? Look it up for yourself, I’m not lying! I could not even fabricate nonsense like this. All of a sudden fruit cakes don’t sound so weird, right?

As strange as the tradition may seem to us, you have to admit that the tió de nadal itself is quite cute and thus became my inspiration for this week’s project. Let’s see the step-by-step in photos now, shall we? 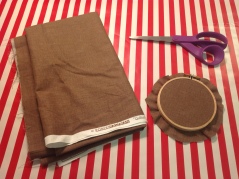